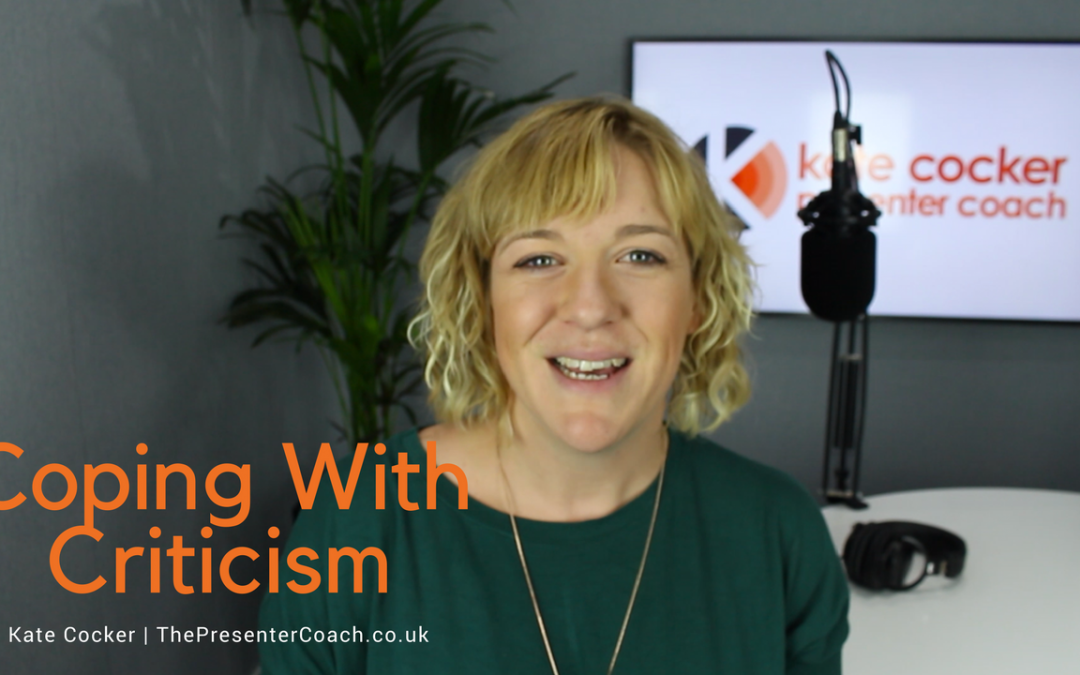 Here’s the next in-depth Radio Presenter Tip “Coping With Criticism”.

Press play on the video below to watch now.

Please comment or ask questions AND please share this post with someone you know who is working in radio, trying to get into radio or who runs a great podcast.

To check out Module 1 of my new “Better Radio Presenter” Course 100% free of charge, visit http://ThePresenterCoach.co.uk/radio

Hi, my name’s Kate Cocker, and I’m the Presenter Coach, and I have been working with radio presenters now for nearly 20 years, whether that be at grassroots, are at national, top of the game level.

I’ve worked with loads of presenters across that range, and the one thing that comes up all of the time, no matter whether you are at the top of your game or just starting out, is how to deal with criticism, because you know what? The minute that you put your head above the parapet, someone somewhere is going to think that it’s okay to text you at the studio, or to tweet you, or to put a Facebook comment, or something like that saying something like, “You’re a buffoon.”

And I’ve seen loads of radio presenters deal with this in loads of different ways.

Some radio presenters like to just ignore the text console in the studio, so they completely ignore it, and they let their producers give them the texts. Now, in some cases, that’s not possible because, in some cases, you don’t have a producer, so you kind of have to see the interaction coming into the studio. And it’s almost impossible to ignore it.

The other thing I hear a lot is presenters will go to their producers, or to their bosses, or people in the studio and they’ll go, this has happened, isn’t it awful? And the reaction is, oh, just ignore it! Which is really difficult, because it’s coming directly at you. It’s really hard to just ignore it.

But the one thing I would say is to try not to react with it.

I worked with one presenter who made a mistake on air, and it got misconstrued, and whipped up, and on Twitter, and it was so hard for him to not reply to those arguments and the things that people were saying about him on Twitter, which weren’t even true, but he just had to ignore it, because if he’d engaged, it would’ve just made it worse, and you can’t control the tone of voice that people are reading what you have written.

So, try not to engage with it.

However, I have heard of presenters, and I’ve worked with presenters who have called people back who texted them, and that has had varying degrees of success for them. But again, it’s not about shaming these people, so don’t put that call on air. Just maybe have a conversation with them and say, did you know that I got that? And most of the time their reaction is, oh my goodness, I’m so sorry, I didn’t think you’d see it.

Now, the one way that I have found that a lot of the presenters that I work with do really like, there are two ways to look at this, and both of them were pointed out to me by reading the work of Brene Brown, who is a vulnerability expert, shaming expert. Academically, she’s brilliant, and I really urge you to read her work. But there are two things that she says.

So let’s apply some compassion, let’s apply some generosity to the way that those texts are received, and if someone is saying to you, “You’re a buffoon,” they’re probably not in a great place, whether they know that or not.

The second thing that Brene Brown drew to my attention was a quote by Theodore Roosevelt, which I think you’ll see it get passed around a lot, but it’s brilliant, so I’m going to read it to you now.

“It’s not the critic who counts,
not the man who points out how the strong man stumbles,
or where the doer of deeds could’ve done them better.
The credit belongs to the man who is actually in the arena,
whose face is marred by dust, and sweat, and blood,
who strives valiantly, who errs,
who comes short again and again
because there is no effort without error and shortcoming,
but who does actually strive to do the deeds,
who knows great enthusiasms, the great devotions,
who spends himself in a worthy cause,
who, at the best, in the end,
will triumph by achievement,
and at the worst, if he fails,
at least fails while daring greatly,
so that his place shall never be
with those cold and timid souls
who neither know victory nor defeat.”

Criticism is something that you can allow to roll off your back if it’s coming from a place where they are not doing the work that you’re doing, and they are not sat in that arena with you.

You deserve to be taking risks and only hearing criticism from people who are taking those risks with you, like you.

And I hope, and I’ve used this tonnes of times now, that actually what it does is it makes it really simple for the presenters that I work with, because they just go, right, I don’t need to listen to that anymore. Am I satisfying my customers’ needs? Yes, I am. Are they saying mean things about me? Well, that one is, and that’s okay, because that’s the only one that is in today, and you know what, they may be in a bad place, so I’m just going to ignore it, for want of a better way of putting it.

So, I really hope that those two things really help you with how you deal with criticism, and just allow it to roll off your back, because actually, you’re taking a risk, you’re putting yourself out there, and that takes a lot of courage, so you should be proud of yourself for that in the first place.

For more tips about radio presenting, or whether you want to be a better radio presenter, head over to my webpage at thepresentercoach.co.uk/radio, and there you can download the first module of my Better Presenter course, completely free.