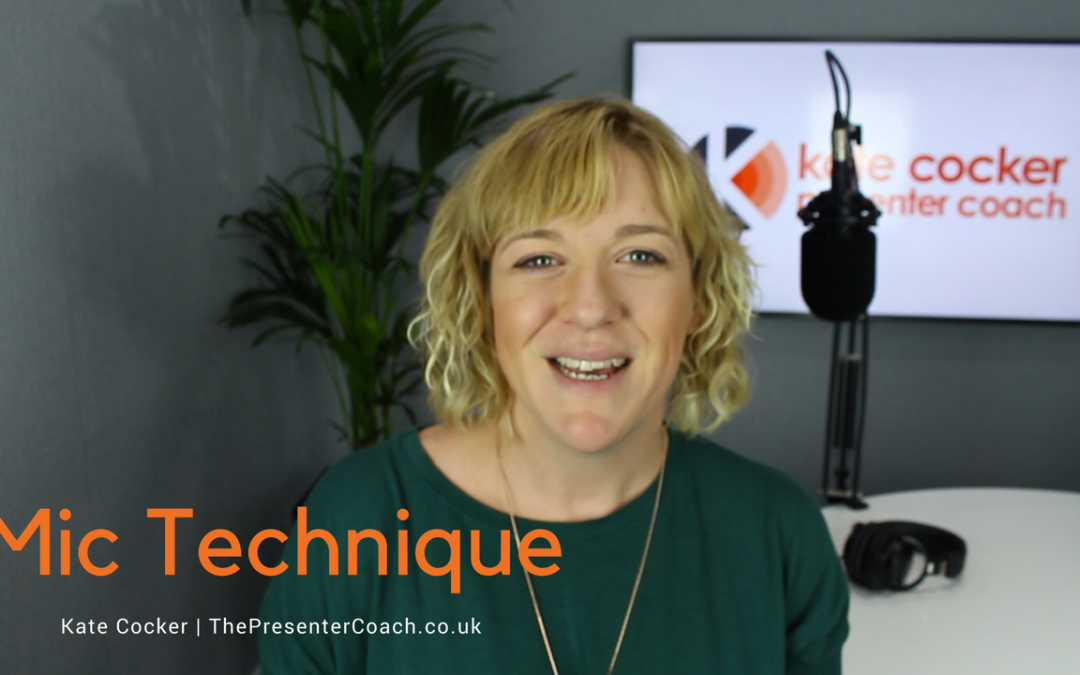 Please feel free to like, comment or ask questions AND please share this post with someone you know who is in radio, runs a great podcast or broadcasts online. To check out Module 1 of my new “Better Radio Presenter” Course 100% free of charge,visit http://ThePresenterCoach.co.uk/radio

Click the play button to watch the video below.

Hi, my name’s Kate, I’m The Presenter Coach. And I just wanted to do a little bit with you about how to get some good mic technique going.

So here’s the microphone, hi microphone, hi. And I’m always really surprised that people don’t really understand where to talk into these microphones ’cause this is what you normally have in a radio studio.

Sometimes they are up the other way, and they’re like, so. But what you’re looking for, if you tug this down, there is often a logo at the top of the microphone, and that is where you wanna be speaking into. So you’re always talking into this part of the microphone, not like this unless it is an absolutely directional mic in that way. So you’re talking into it like this, good old king’s speech, if you watched The King’s Speech, he does this. It’s always good to have a good distance from it.

Now if you’re too close to the microphone, you are gonna lose the texture in your voice, and you’re gonna really go ‘th th th th th th’ as you do it. I worked with a presenter once, and she was really good vocally, and I couldn’t quite work out what it was that,.. Meaning that actually she sounded a little bit flat, and we realized she was just far too close to the mic. So if you come back, you’ll be able to get your vocal range and tone.

Obviously, if you need to shout, really lean back! And if you wanna go really intimate, you can actually go really close, but make sure you go quiet again.

Now the number one problem that people struggle with is popping of the mic which is when you get that sound ’cause there’s too much air coming out of your mouth and to the mic. And even with one of these lovely pop shields, you don’t always get the results that you want.

So one thing to do if you’re finding that you are popping loads, and you can’t control it, and it’s really annoying in your headphones, you can move away from the mic a bit ’cause that will stop the air rushing at the mic, but the one thing you could do is talk across it slightly, so that when your air is coming out of your mouth, it’s going straight across and not directly into the mic, and that will really help with reducing that popping.

And that’ll help if you’re doing podcasts with a little mic on the table, and you’re finding that you’re popping loads. Just move the airflow away from the mic slightly, but don’t turn your head away obviously because then you’ll just lose all the power of the sound of your voice.

So that’s my tip, some mic technique tips for dealing with popping and things like that. For anything more, check out my online course at thepresentercoach.co.uk/radio. 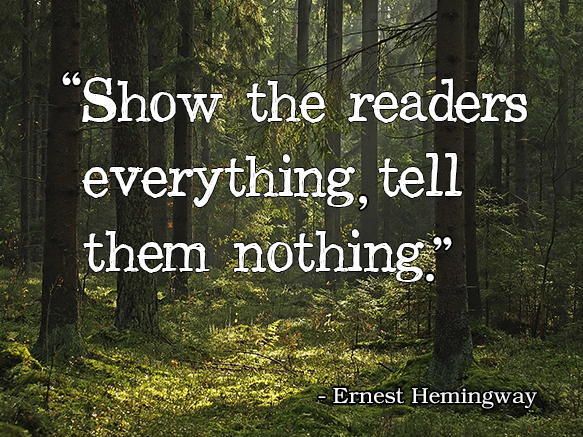 I’ve been saying “Show Don’t Tell” in a lot of my sessions recently. It’s one of the fundamentals in “performing” your content and drawing in your listener.

The ideology I use is taught in novel writing. The lesson is that you give the reader the opportunity to add their imagination to the story. Instead of the author writing “She laughed nervously” – which tells the reader exactly what is going on, the ‘Show Don’t Tell’ version is “Her cheeks flushed as she laughed”.

A good author then allows you, as the reader, the space to put your thoughts and pictures into the book, to read betwen the lines, meaning you’re able to engage with the content at a personal level.

How then does this translate to presenting?

Often it’s how you go about explaining your content.

Imagine you are using an audio clip from an interview. You set it up by giving it context…

“Tom Odell was in yesterday and we asked him what he thought of the Euros…. Here’s what he said” <Play Clip>

At a basic level, you don’t need the “here’s what he said”. It is fine to say:

One step further might get you to a more interesting place

“Up next is the new song from Tom Odell – He’s a big football fan, how’s he feeling about the Euros? <PAUSE FOR A BEAT> <Play clip>”

In an “On Stage” context you can also think about how you are using your slides to show what you are talking about rather than telling your audience what you are saying. You and I both know we shouldn’t write up bullet points on the powerpoint word for word, but when we get to it it’s difficult to find images. We’ve all done it: the bullet points find their way back in. Unfortunately it is a sure fire way to get your audience to glaze over.

Of all examples of the “Show Don’t Tell” technique in presenting content, my favourite has to be the first 60 seconds of this.

Serial: A Masterclass In Vocal Tone

It’s back. The podcast that blew up all podcasts. The elite in storytelling.

“Serial” landed this weekend and if you are anything like me, you’re already starting to ache for episode 2. Listening to the first episode, I was struck by one thing in particular: vocal tone

The ongoing jeopardy experience throughout this podcast is that you are working out the authenticity of every contributor. The fun is in spotting the liar. But without being able to see their body language or facial features, you have one thing to go on…. their voice.

As the series goes on you will be listening out for any over detailed descriptions, individuals who add or take away from their original story (remember Jay from the last season?) or if anyone counteracts the story you are buying in to (“there is no payphone at Best Buy”).

In “DUSTWUN” (S02 Ep01) there is a great moment where narrator, Sarah Koenig references the soldiers’ stories and says the one consistent is that none of them saw it coming. They all express surprise at Bowe leaving the camp. In the montage of the soldiers’ voices that follows, what you listen for isn’t the words, but their vocal tone.

I still think it’s amazing that your ears can instinctively tell so much without even hearing the words. You are listening for tightness of the throat, overly forced tones, exaggerated dancing intonation & excessive “erms” or unaccountable stutters. All signs that someone is lying.

Even down the phone I was listening for Bowe to trip up. He says he wanted to be like Jason Bourne…. Really? Is that right?… his vocal tone seemed so relaxed and honest so it must be right?

The actual master of the piece, is Sarah Koenig herself. I know that there must be a script – so much detail and pieces to pull together, it needs it. The opening sequence, as she describes the video of Bo being released by the Taliban, is exceptional in its picture painting. And her relaxed cliff hanger at the end of the piece: “Hello?” she says followed by “That’s me talking to the Taliban”… is inspired.

The thing she does best is tell the story so authentically: her words and her tone sound like she is talking to me as if I was with her “in the pub”. When she breaks from the script you hear a more conversational Sara, but you always, always believe her. Not only does the script leave room for her own doubt, making her more believable in her vulnerability, but her delivery is real. It makes for a deeply engaging experience.

Finding your authentic presenting voice can take years to master, there are various techniques that can help you, but mostly it’s “On Air Miles” and practice that masters it.

Without deviating too far from Serial, there is a great interview between Ira Glass (Sarah Koenig’s colleague and “This American Life” creator) and Alec Baldwin on his podcast “Here’s The Thing” where they talk about vocal delivery. Ira plays Alec a piece he did for NPR and dissects it beautifully. It’s really worth a listen…